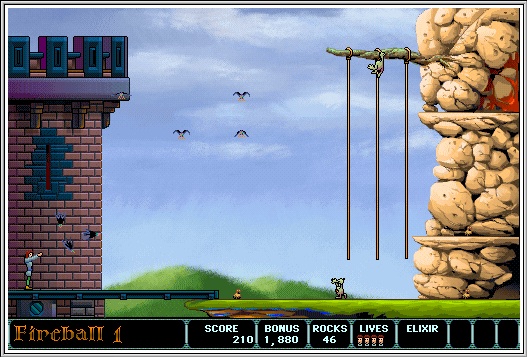 Including almost identical gameplay as Dark Castle, Delta Tao also added a few of their own things, such as a new difficulty "Novice" for beginner players, eliminating some of the harder levels in the game and having fewer monsters. Also, the great hall's door setup was static, as opposed to the random setup of the original. There was a new Secret Level added, it was accessed by hitting 4 spots hidden through out the game, without dying. They added a save system that allows one save, that can be saved, or loaded from the great hall.

The evil Black Knight terrorizes the townspeople, our hero Prince Duncan sets out to topple his throne, in order to do that, he must travel to the three sections of the castle: Fireball, Shield, and Black Knight. With Trouble, being optional, if fell into.

This game had 16 levels, one more then the original game, all of which came out of the 4 doors in the Great Hall. Unlike the first game the setup of the doors is static, rather than random.

The Secret level was announced in the Color Dark Castle F.A.Q. [2]. The F.A.Q. said you had to pull 4 secret chains, this is untrue, but one must find 4 secret spots. The first 3 spot's order don't matter, but the fourth must be done last. It's easiest to do when the shield and the fireball have already been obtained. To activate a spot, one must find the spot, and jump at the wall. To find the secret room, one must hit all 4 spots without dying.

Still, this is considered by far the best remake of the original game so far.

A remake of the original version for mobile was released in 2006. It is developed by Super Happy Fun Fun and published by Bandai, It contains slightly remade level designs as well as updated color graphics.

Retrieved from "https://darkcastle.fandom.com/wiki/Color_Dark_Castle?oldid=4390"
Community content is available under CC-BY-SA unless otherwise noted.