Dark Castle is a 1986 computer game for the Macintosh published by Silicon Beach Software. It was designed and illustrated by Mark Stephen Pierce and programmed by Jonathan Gay.

Dark Castle is a platform game where a young hero named Prince Duncan tries to make his way to the evil Black Knight, dodging objects as well as solving occasional puzzles. The game was praised for its use of sampled sounds to great effect, gameplay, and high res graphics. A sequel titled Beyond Dark Castle was released in 1987. In 1994, a Color remake, titled Color Dark Castle was released. A second sequel, Return To Dark Castle, was announced in 2000, and, as of 2008, has been released by Z Sculpt Entertainment, and SuperHappyFunFun.

Movement within Dark Castle differs from most platformers of its time.  The player can aim and throw rocks, there is no health system, and the game contains a boss fight that does not involve direct interaction with the boss.

Duncan can run, jump and duck, and can throw a limited supply of rocks at his enemies. More rocks can be found in little bags scattered throughout the levels, as can bottles of an elixir which provide a one-time antidote to bites from the numerous rats and bats found around the castle. If bitten without an elixir in his inventory, Duncan gets knocked out.

To defeat the Black Knight, Duncan needs a magic Shield and the power to hurl Fireballs, both of which can be found within the Dark Castle. The game begins in the Great Hall, where the player can choose one of four doors. The large center door leads to the Black Knight. The right door is marked with the shield and the remaining two mysteriously alternate between the fireball course and a more troubling path into the castle's dungeons.  These two doors are assigned at the beginning of the game, but always lead to the same place until a new game is started.

The game can be played at three different skill levels, the hardest Advanced level containing more enemies and a few extra surprises.

The controls in this game are as follows: 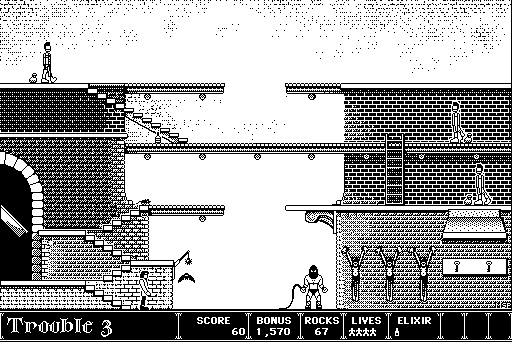 The story in Dark Castle is rather simple. The evil Black Knight terrorizes the townspeople, our hero Prince Duncan decides to topple his throne, but in order to do that, he must travel to the four sections of the castle: Fireball, Shield, Trouble, and Black Knight.

This game had 15 levels, which came out of the 4 doors in the Great Hall, the first two doors are random.

In the original Dark Castle the hero was given no name, and was just referred to as 'Hero.' This was changed however in it's sequel where his name was revealed as Prince Duncan.

In the color remake, Color Dark Castle, it was changed so that it said his name.

The Dark Castle Series had many gameplay elements that set it apart from other games in the market, some of which include:

The Bonus ticker in the Great Hall becomes a single-digit number that indicates the difficulty.  0 for Beginner, 1 for Intermediate, 2 for Advanced, and 3 or 4 for the post-advanced modes (See Difficulties article).

In 1987, the sequel Beyond Dark Castle was released, in which Duncan has to return and defeat the Black Knight who is still alive. To access the Black Knight's tower, the player must first gather five magic orbs which are placed in various hard to reach places. The orbs have to be returned to the Ante Chamber and placed on 5 pedestals for the gate to open so Duncan can face the Black Knight.

Beyond Dark Castle had an engine similar to Dark Castle but with improvements and additions, like a health bar, Bombs, and other items, also including some levels where the player could control a "personal helicopter" of sorts. These levels and maze levels were side-scrollers instead of being limited to a single screen. Games could also be saved in a "computer room" level. Unlike the original version of Dark Castle, if you beat the game on Advanced, it will give you a special ending.

There have been quite a few remakes of Dark Castle, from only a few years apart, to over ten years between remakes. Return To Dark Castle, isn't a remake, but a sequel, and is included here because it contains all the levels from Dark Castle, and Beyond Dark Castle.

In 1994, the video game developer Delta Tao acquired the rights to some of Silicon Beach's old games, via Aldus, and were able to produce and publish the modernized Color Dark Castle.

The new version included full color graphics, while changing some other things such as the Water from Fireball 2,3 into Lava.

This version also included a new Difficulty, which let you skip to the end destination from any door in the great hall (e.g. Great Hall, to Fireball 4) with fewer Enemies and easier gameplay.

In 2000, a new sequel called Return to Dark Castle was announced, being Developed by Z Sculpt, where a new young hero called Bryant, the nephew of Duncan, must once again defeat the Black Knight.

Return To Dark Castle includes new game play mechanics, such as being able to keep weapons with you, and store extra orbs in a room.

Also, it was stated that it would include a Level Editor, with the ability to create your own quests.

A DOS version of the original Dark Castle was also released, though close to the original game in terms of level design, and gameplay, it lacked the high res graphics and clear sounds of the mac version. To compensate for its loss, They added color to the game, at the time PCs had Colors, where macs did not, The game only was in 16 colors.

The general consensus, is that the game is highly inferior to the mac version, in graphics sound and gameplay.

A version for the Mega Drive/Genesis was released by Electronic Arts in 1991. This version of the game had highly changed art direction, with some level's backgrounds, and some of the levels seemed to take place in entirely different areas. The game also featured cut sounds, and sounds moved from one thing to another, such as the bat flying noise changed the the bat dying noise. The game also featured a confusing control scheme, making it impossible to duck after receiving the shield, among other hard to manage controls.

This game is considered to be the worst rendition of Dark Castle, and possibly one of the worst games ever made. Fans and critics alike hated the game.[1].

In October 2003, the Company SuperHappyFunFun, which includes one of the two original developers, Mark Stephen Pierce, acquired the rights to the Dark Castle Series, so that they could create a Dark Castle game for Cell phones.

It was finally released in 2006, it was published by Bandai. It contains slightly remade level designs; borrowing from both Dark Castle and Beyond Dark Castle, it also has updated color graphics.[2]

It is now out of print and impossible to buy anymore. It was sold through Verizon, and Sprint when it was still being sold.

Versions for the Apple IIGS, Commodore 64 and Amiga were released in 1989 by Three Sixty. This port was programmed by Lane Roath, and was similar to the Macintosh version, with lower resolution, color graphics and some controls.

There was a version released for Atari ST.[3]

There was a version released for CD-i.

Dark Castle Black Knight 3.
Add a photo to this gallery

Retrieved from "https://darkcastle.fandom.com/wiki/Dark_Castle?oldid=4495"
Community content is available under CC-BY-SA unless otherwise noted.